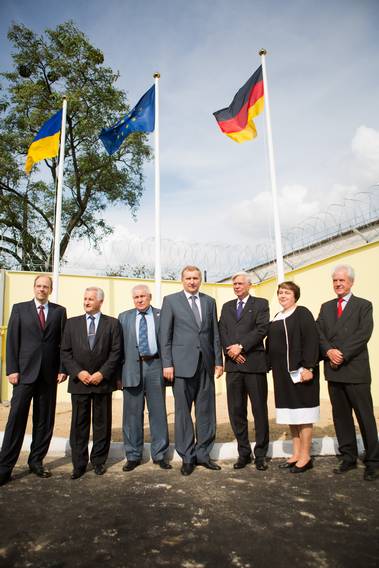 In October 2013 Project “German-Ukrainian cooperation in the matters of nuclear material protection within the frame of Global G8 Global Partnership Against the Spread of Weapons and Materials of Mass Destruction” was completed.

The effects of this project consisted in the reinforcement of the physical protection, modernization and re-equipping of Ukrainian Transport and Warehouse Complex of the State Enterprise "USIE IZOTOP" (TWC SE "USIE IZOTOP”) according to the current safety requirements.

Project implementation was carried out in two directions:

The project is implemented under financial support of German government through Federal Ministry of Internal Affair by GRS mbH pursuant to the Agreement between the Cabinet of Ministers of Ukraine and German government dd. 29.12.2009 made by means of verbal notes exchange by virtue of:

International technical support projects on collection of exhausted and unprotected ionizing radiation sources and provision of their safety storage.

Within the frames of bilateral Agreement between US and German governments with Ukraine the rise was given to sponsorship for implementation of international support projects: - “Improvement of preservation of exhausted ionizing radiation sources in Ukraine” (2005) and – “Decommissioning of irradiation facilities and provision of IRS safety storage (2008).

“IZOTOP” became one of the Ukrainian recipients of these Projects which within 2010-2014 carried out complex research, disassembly, collection, discharging, preparation works for safety IRSR storage in purpose-made containers.

Within the project “Improvement of preservation of exhausted ionizing radiation sources in Ukraine” four irradiation facilities of medical and industrial purpose were discharged by “IZOTOP”, out of which highly-active IRSR with radionuclide Со- 60 in amount of 253 pcs. with the gross activity of - 2,3 х1016 Bq were removed.

Within the Project “Decommissioning of irradiation facilities and provision of IRS safety storage 10 393 pcs. of IRSR were removed and collected by “IZOTOP” (alpha-, beta- and gamma-ray, from highly- to underactive), with the gross activity of 15,4 х 1015 Bq.

Discharging of the highly-active IRSR was carried out by “IZOTOP” experts in the “hot” cell located at the enterprise manufacturing site. Removed highly-active IRSR in accordance with the IAEA Standards “Radioactive sources classification” ІАЕА-ТЕСDОС-1344. Vienna, 2003; “Radioactive sources safety” ІАЕА-ТЕСDОС-1355. Vienna, 2003, refers to category 1 and is considered to be potentially and extremely dangerous for population.

Highly-active IRSR, after their examination and identification in the “hot” cell, were placed in the special containers with the appropriate bio-protection the purchase of which was either carried out within the frames of international project sponsorship. Highly-active IRSR EIRRS were transferred in such secure containers for long-term storage to special industrial complex “Radon”. Implementation of the above international technical support projects allowed clearing up Ukrainian territory from the exhausted und unprotected sources produced in 70-80-s of the past century which currently represent themselves as radioactive waste. This allowed not only provide safety IRSR storage and increase radiation safety level for the population, but also create additional barriers for their illegal removal and use for criminal purposes.